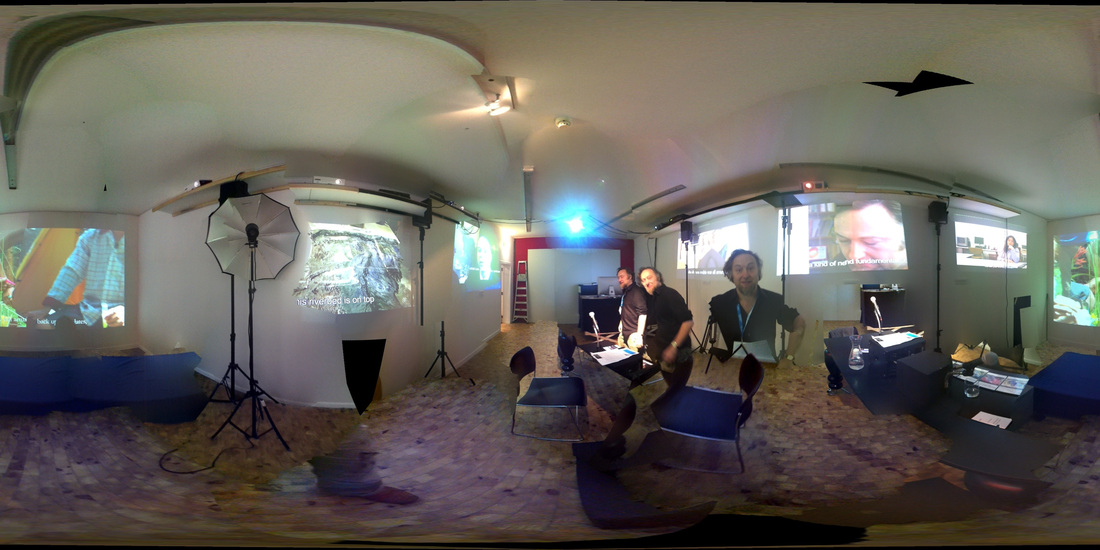 Synopsis
The final installment of the trilogy Archival Fields, in which experimental filmmaker and researcher Zoot Derks questions the use of technological timelines in a philosophical and artistic way. What kind of consequences does the use of such programmed timelines have, which place video images in a historical context and in doing so create an instant past, or "pastness"? Derks invites the audience to participate in his performative video installation, which will stretch out through the staircases, hallways and side rooms of the Flemish art center De Brakke Grond, questioning the editing of video images. The filmmaker will use the material he shot for the first two parts of the trilogy, PolderPiece and Timeline Criticism, as well as new material shot during IDFA. He will discuss his subjects with specially invited guests and random passersby. Central to the discussions will be the concept of "suture," which can mean the same thing as "editing" but can also be translated more literally as "sewing," or more theoretically as "a break in the prevailing discourse." Together with the audience, Derks will walk the tightrope between these various meanings and the dividing line between word and image. Vertoningen There are no upcoming screenings of this film

If any field of study might offer some explanation of these very common – and very significant – architectural situations, it is film theory’s most famous borrowing from the psychology of Jacques Lacan: the idea of suture. Adapted to the structure of film narrative, the suture involves a group of techniques whereby the "outside" (the audience or the externality imagined by adapting a narrative point of view) is connected in a quick and often surprising fashion to the center of things. "Post-theorists," in throwing out Lacan, have also underestimated the suture’s importance. A reinstatement is justified on a number of grounds.

Suture is best described as a sudden reversal of the "Cartesian" assumption that space and time are homogeneous, linear, and infinitely extended. Sailing around the world to encounter the Indies would have led Columbus to a suture event had he not encountered an intervening double. Finding a traitor in one’s midst is a suture situation; the feared outside, against which every precaution has been taken, turns out to be interior. Edgar Allan Poe used this idea in "The Masque of the Red Death," where the plague strikes inside the castle used to seal it out.

Suture dramatizes the psyche’s opposition of reality to the Real. It also demonstrates how commonly and unthinkingly we violate the rules of reality, the symbolic network of relationships, to get at the surplus zones lying beyond representation. What is striking about suture is that it is a thoroughly architectural idea. The simplest and most public example would by Maya Lin’s Vietnam Veterans’ Memorial. A literally chiastic structure guides the audience to the point where the reflections, at first aligned with the representational function of the memorial, take on a life of their own as spectral ghosts standing behind their names. In a technique borrowed from the Dylan Thomas poem/play, "Under Milk Wood," where the dead of a cemetery come out to tell their story, the past finds a voice from precisely the center of the externalized Other, thanks to the mechanics of mirrors.

Suture is also available through the trick of scale inversion, which makes small things work like large things and vice versa. Scarpa’s openings and edges could be regarded as a textbook of suture. The inside-outside courtyards of Stirling work the same way, creating ocular interiors that curve buildings in on themselves, compounded by spiral circulation. The original of this kind of suture is the Cretan Labyrinth, an emblem of recursion. Looking at the pattern of turns, this model turns out to be a fractal – its ABA pattern is really A(aba)B(aba)A(aba). Such is Hell, all cleaned up.

There are other contributions of film theory that one might mention in relation to the reality/Real problem and the four fantastic topologies that address it. Acousmatics – the voice that cannot be located – is an ideal route to return architecture to issues of sound and voice. Without this connection, which originally had to do with the worship of household gods and structure of the hearth, spaces for hospitality, and the development of cuisine, the origins of architecture remains in shadowed obscurity. With it, the ancient and continuing relationship of architecture to rhetoric becomes evident.

Other themes and ideas lie in wait for proper and fruitful exploitation by architecture theory. Individual films – in particular the works of auteurs who repeat themes, structures, and techniques – point to the importance of the "sinthom," the Lacanian version of the symptom adapted for the purposes of art. The sinthom is not a thing, a technique, or a cluster of themes. It is, instead, an empty and indefinable center around which swirl elements whose only connection is the intense "black hole" of "compulsive" repetition. Such swirling is strongly in evidence in Corbusier’s and Aalto’s work – and nowhere more clearly stated than in Villa Savoye and Villa Mairea. Contemporary theory’s preference for projective relationships tying architecture to political and social issues has difficulty coming to terms with empty centers, non-meaning, and non-linear association of topics. The sinthom requires a "hopscotch" method of study that is able to change levels, genres, and media quickly but accountably. The main purpose of this diagrammatic approach to a topology of architecture is to find a template that acts not as a map but as a "rhythmic design" calibrating the "returns to the sinthom" that occur in so many different circumstances.