The ability to sacrifice at any moment who we are, for what we could become.

Jeanette Groenendaal / G-net (Genant) is a new medium performer, researcher at DasArts (advanced research for Dance and Theatre studies), forming an art couple with her husband Zoot and an artist from Gallery De Praktijk.

Donation series 2005
Temper Tantrum, Dramayama and "a rare flute om a slippery slope". A performance rhythm culminating on june 21th 2005. Early 2005 ZootenGenant performed an planetary pilgrimage through Tamil Nadu, India. The journey was a quest and initiation to complex temple performances through observation and experience, crowned by discovery of empty space in unio mystica. For those looking for profound transformation ZootenGenant presents: Temper Tantrum, a guide through the Obscene-Serene.

Is self-sacrifice enabling us to sacrifice other people without blushing? Donation participation required
Jeanette will work Live in ResearchSPACE during TestPortal 2005 developing exercises for audience participation which culminate in a an unwinding soundscape performance "a rare flute on a slippery slope" on midsummer night, the 21st of June (bring your own radio).

On Friday 17th of June Jeanette will be in two places at once connecting the DasArts Daily festival in Frascati. 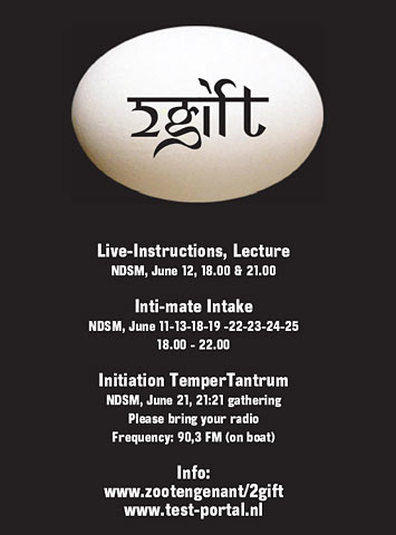 ZootenGenant, Donation series 2005
1) Temper Tantrum  (for the inner sky) .....
a performance rhythm for june 21th 2005. In early 2005 ZootenGenant performed an planetary pilgrimage through Tamil Nadu, India. The journey was a quest and initiation to complex temple performances through observation and experience, crowned by discovery of empty space in unio mystica. For those looking for profound transformation performance events, ZootenGenant presents Temper Tantrum, a  guide through the Obscene Serene. 'The ability to sacrifice at any moment who we are, for what we could become`' or`` Is self- sacrifice enabling us to sacrifice other people without blushing ?'

Jeanette will work Live in Research SPACE during TestPortal 2005,
developing audience participating exercises, with a culmination on Midsummernight.


2gift Performance sect newsgroup
After Initiating It is time to have some try outs with the performance sect. I may be waiting for a friendlier climate than july /august 2005. There are over 80 inscriptions of peoples interested to jump into directions of any kind. Legal, illegal, Art or political, writing, film or photography. Art school students, filosophers, independant artists, musicians and videomakers based in Amsterdam have suscribed.

I will have to install the nework. At the moment I am researching Yahoo groups, bloglist groups and other possible online systems. A search through network-cultures by former member of board Zootengenant is Geert Lovink. Discovering of the vast thousands of online groups is being digested and getting form soon. Members of the sect will recieve an e-mail and preferably by the end of august we will give it a try #3 on the slippery slope of NDSM

Initiate a Live theatre-group, where every member is initiator, on line-empowerment gathering. Call for performers/assistance and your mail reaches the group in one button. Ready to appear.

2Gift is based on an exchange economics. It is a Gift Community is inspired on the principles of offering like in ancient ritual community. A community willing to share their forces in Art projects. It seemes an Ideal fantasy to be realized in those days with the climbing of the sun to her solstice, High Hopes.

2Gift http://www.zootengenant/2gift will develop as an online newsgroup /community for Performance-art and Theater reasons, you could think of a Flash mob series if you wish some thought indication.

I am currently studying the network possibilities ( network cultures). I might use blogger of Yahoo groups. As I am testing different options to have a very user friendly solution for this group. I will be moderator for the on-line information but eventually the group will be following its own course. Most reasonable next happening will be on the slippery slope NDSM again by the end of august 2005.

To raise a sect to enforce each other in the bigger than life of bigger than personal ideals can reach by yourself. Trying to reach out for the world beyond ego drives personal businesses. To overcome the deception of our tiny little ego perception and reach out towards the energy of Us, A donation exercise for the West, no worshipping of statues or law and order but celebrating each others irrational fantasies hence exchanging the directors role. A playful fluctuating hierarchy for initiatives should be compact and simple.